MY PRIMARY CONCERN AT CHRISTIAN COLLEGES 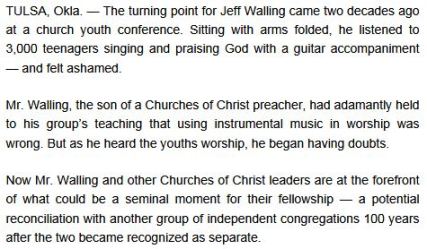 “Now I urge you, brethren, keep your eye on those who cause dissensions and hindrances contrary to the teaching which you learned, and turn away from them” (Rom. 16:17).

It’s not politic to do so, but I direct my concerns here toward a particular man named Jeff Walling who I believe is not a good representative for the church of Christ. I was provoked to write down my concerns, for the sake of others, after he spoke at my son and daughter’s college in a morning chapel
service, where attendance is required. It was what he said in the chapel that provoked me to write.

In Mr. Walling’s chapel visit (according to my children), he was well-received by the other students, many of whom are not Christians and do not have a church of Christ background. In that address, Mr. Walling related how as a young man he had a very narrow view of which was the right church. But now he has grown. He implied that the church of Christ of his early years remains narrow-minded today. In that address he said something along the line that it isn’t about how much you know: faith is what matters (this was his message). This is code language against the church that teaches five steps toward salvation and believes that musical instruments are a matter of fellowship. Walling’s “us and them” language was to contrast his openness and acceptance of others against the churches he grew up in. This is the Mr. Walling who accepts the Christian Church and treats their use of instruments as a non-issue of fellowship. He is not a good representative of the Church and the truth.

At one time, chapel was like worship where daily devotion to God was encouraged. Where the Bible was taught and the things that were said were the Gospel truth. The worship was not vain, but was Biblical. But now things are different. Mr. Walling leads the chapel and says things that are not Gospel truth.

Some people build the church and some people tear it down. Anything that waters down who and what is acceptable to God might be building something, but it’s not the church of Christ. I am deeply concerned over those who make emotional appeals, not doctrinal appeals, to the young and inexperienced at Christian Univesities. Charismatic story tellers don’t save souls.

“For such men are slaves, not of our Lord Christ but of their own appetites; and by their smooth and flattering speech they deceive the hearts of the unsuspecting.” (Rom. 16:18)
_____________________________________________
Mr. Walling sees no problem with worshiping with instruments. He fellowships with denominations. You can read the Christian Chronicle article where Jeff Walling trades Bibles with the Christian Church preacher and encourages fellowship with them because no one is perfect. That’s a red herring. The discussion between truth and spirit worship and being perfect are two different issues as any Bible student knows. But Walling uses such fallacious tactics to fool people. Jeff Walling and others like him pose a danger to our sons and daughters.

Faithful Christians fight the good fight of faith. They build the church upon the foundation of Jesus Christ and the Apostles. Paul said, “each man must be careful how he builds on it” (1 Cor. 3:10). Thus they diligently teach and preach the principles laid out in the Scriptures (1 Tim. 4:13,16). They carefully and lovingly speak the truth so that hearts are convicted to repent and turn to God (Eph. 4:15).

Parents need to prepare their children with the Bible before they send them to Christians Universities because there is not much hope that the whole counsel of God will be taught, in or out of chapel. The Mr. Walling types are often welcomed and parents need to know who will be indoctrinating their children.

Parents have a lot of responsibility here. I am not opposed to sending my kids to these schools. There are many positives if the young people go equipped in the faith. Regardless of the theological slant of the school, it’s important that our children be grounded in the Truth before they leave for college. The responsibility is not all on the colleges. Teach them about the church that Jesus built and purchased with His own blood (Acts 20:28).

Everything about the Christian college is not bad. I don’t mean to indict everyone in the administration or faculty. My kids are getting a good education at the Christian University. There are a lot of positives that my children report. But know what your children are heading into and equip them with the truth before they leave home.

It is the undercurrent of religious liberalism from speakers like Jeff Walling that threatens to turn our young people away from the church of Christ. This is my concern as a parent of children in Christian College.