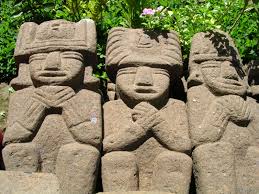 Man is so instinctively predisposed to give worship that even the obstinate atheist worships something – exalting himself, his strength, his intellect, or his money. It is folly that he bows to “superstitions” he claims he has risen above. Nations that turn from God do likewise. When once they gladly extolled the Creator from whom its freedoms and virtues arose, they then turn from and remove His name from the public so that they might worship their prosperity. In the United States, where this departure is occuring, one has to wonder if it is considered “constitutional” to read the Declaration of Independence in a school or courtroom or other government controlled setting because it says,

“We hold these truths to be self-evident, that all men are created equal, that they are endowed by their Creator with certain unalienable Rights, that among these are Life, Liberty and the pursuit of Happiness.”

The Founders of these United States believed that freedoms flowed from God and they credited Him. But now that a true evolution of thought has occurred so that God is stricken from the public speech, the folly of idolatry has swept in. Now the “enlightened” people worship their wealth and the planet.

Habakkuk spoke against the Babylonian nation for worshiping its strength. “But they will be held guilty, they whose strength is their god” (Hab. 1:11). The folly of idol worship is that it is not directed at the true source of strength. National idolatry is the nation’s investment in things which cannot stand or last. Whether the idol is a “primitive” carving (Hab. 2:18-19) or something more “sophisticated”, it is still folly. And the folly builds.

When God is rejected, wickedness fills the void. Men devise their own sense of justice. “Therefore the law is ignored and justice is never upheld, for the wicked surround the righteous; therefore justice comes out perverted” (Hab. 1:4). Injustice is related to the rejection of God. It is man’s folly to think that he can create a more just society after he has thrown out the God of justice. To the idols will be sacrificed the the most precious liberties of self-determination, speech, family, property. In the name of enlightenment, there will be no justice for the just.

Do you think the Christian community will enjoy more or fewer freedoms with the new enlightenment of our age? It’s likely that justice will be perverted, good will be called evil, and some Christians will be silenced. The society that turned from God, and turned from the principles that ushered in so many rich blessings, will turn against Christians. As it was for the early Christians, it will be for the Christians in the last days.

“7 When the thousand years are completed, Satan will be released from his prison, 8 and will come out to deceive the nations which are in the four corners of the earth, Gog and Magog, to gather them together for the war; the number of them is like the sand of the seashore. 9 And they came up on the broad plain of the earth and surrounded the camp of the saints and the beloved city, and fire came down from heaven and devoured them. 10 And the devil who deceived them was thrown into the lake of fire and brimstone, where the beast and the false prophet are also; and they will be tormented day and night forever and ever.” (Rev. 20:7-10)