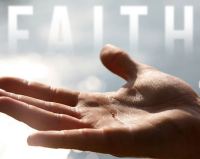 Consider what is said in Luke 17:1-10.   1. Need greater faith to understand the gravity of causing someone to stumble. Takes faith in things from God’s perspective to understand why it would be better to be drowned in the sea with a rock tied to the neck than to cause someone to stumble. When God’s justice doesn’t make sense, we need greater faith.2. Need strong faith to keep forgiving the way God keeps forgiving us. The disciples wanted clarification as to how many times they must forgive their brothers. “21Then Peter came and said to Him, “Lord, how often shall my brother sin against me and I forgive him? Up to seven times?” 22Jesus said to him, “I do not say to you, up to seven times, but up to seventy times seven”, Mt 18. Luke records additional information that certainly you go to the sinning brother and call for him to repent, and if he does, you have to forgive him. And forgiveness is not in mere words but true forgiveness restores the relationship. When we have to forgive the way that God continually forgives us, we need more faith. 3. Need faith to speak and act with the authority of God. Immediately after the disciples asked for Jesus to increase their faith, He said, “6 And the Lord said, “If you had faith like a mustard seed, you would say to this mulberry tree, ‘Be uprooted and be planted in the sea’; and it would obey you”, Lk 17:6. Bypassing a discussion on miracles, there’s no reason to think that God is intending for disciples to be casting trees into the sea. But there’s a principle that we mustn’t miss which has to do with acting and speaking with the authority of God. Disciples are going to be confronting sinning brothers and they don’t need to be going with timidity. They are going to be speaking boldly of the judgments of God and they need to believe every word they are saying. When disciples go out into the world to accomplish great things, they need more faith. 4. Need increased faith to do the will of God. Jesus says, “7 “Which of you, having a slave plowing or tending sheep, will say to him when he has come in from the field, ‘Come immediately and sit down to eat’? 8 “But will he not say to him, ‘Prepare something for me to eat, and properly clothe yourself and serve me while I eat and drink; and afterward you may eat and drink’? 9 “He does not thank the slave because he did the things which were commanded, does he? 10 “So you too, when you do all the things which are commanded you, say, ‘We are unworthy slaves; we have done only that which we ought to have done’”, Lk 17. When a person’s faith is weak, he doesn’t understand the master/slave relationship he has with God. People of little or weak faith argue with God and they pick and choose what commands they will keep. People of little faith would argue with Jesus for suggesting that the slave should continue to serve and tend to his own needs later. Jesus explains that people of faith do not argue with God but instead their attitude is always, “I”ve only done that which I ought to have done”, v10. Is your faith strong to accept the teaching of Jesus Christ?  Spoken with love. Dan Mayfield

Like Loading...
‹ DO NOT SURRENDER WHAT GOD HAS GIVEN FOR YOU TO DO
NO DICTA IN THE BIBLE ›