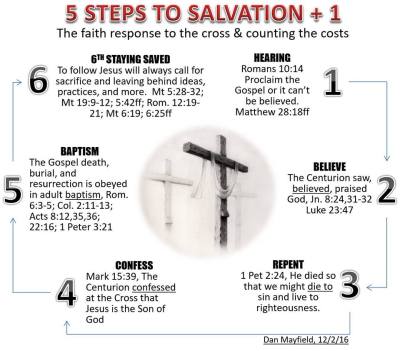 Baptism and circumcision are clearly different, being part of two different covenants, but I can’t agree with the following pedobaptist statement: “The New Testament nowhere describes baptism as the New Covenant replacement for Old Covenant circumcision.”1The one is fine to one who has no faith and no sin. The other is fine to one who has faith in God and has sin. What does Paul say about Baptism and being raised by God into new life? He says, “11 In him also you were circumcised with a circumcision made without hands, by putting off the body of the flesh, by the circumcision of Christ, 12 having been buried with him in baptism, in which you were also raised with him through faith in the powerful working of God, who raised him from the dead. 13 And you, who were dead in your trespasses and the uncircumcision of your flesh, God made alive together with him, having forgiven us all our trespasses,”. So before the pedobaptist says the New Testament says nothing connecting circumcision and baptism, he needs to address this.

The old law was external and cold as tablets of stone. Jeremiah says that old covenant was to be done away because it produced a nation of covenant people who didn’t know God. Under the New Covenant, you can’t enter it without knowing what you are doing by confession, repentance, and immersion.
______
1. https://www.google.com/amp/s/www.gotquestions.org/amp/infant-baptism.html?client=ms-android-google

Like Loading...
‹ THE FOUR STATES OF THE SOUL, INCLUDING THE LIVING DEAD, Dan Mayfield
THE NEED FOR FREEDOM, Dan Mayfield ›