[My response here and also HERE is to a serious error by Mr. Dan Billingsly and was only prompted after the church where I preach received via postal mail a small booklet written by Mr. Billingsly. I decided to do my part to refute the man’s ridiculous position that the teaching by Jesus in the four Gospels constitutes Old Testament teaching. Now it is October 2010 and Billingsly is emailing his false doctrine to church secretaries seeking to get a foothold in local congregations and he confronts me head on. Read Billingsly’s response to me HERE.]

A brochure came in my mail today, titled “The Roman Catholic New Testament ‘Title Page’. The ‘Unauthorized Page’ Placed Between Malachi 4 and Matthew Is The Most Misleading And Misunderstood ‘Page’ In YOUR Bible!”, by Dan Billingsly. I had a couple of immediate thoughts. First, the title needs work. Second, that’s quite a claim if it is true. 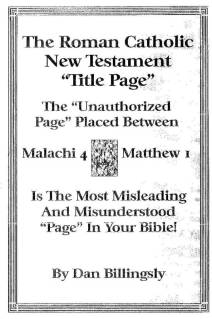 I wondered what this was all about. At first, I thought it would be a typical lesson on distinguishing between Old and New Testament doctrine, something I believe is important (Heb. 9:15-17). But it turned out to be a sales pitch for a new New Testament with a radically new idea behind it. The four Gospels are included in the Old Testament, not the New Testament. I wondered what evidence the author would offer for this position and was there another motive at work. Though this was a completely new idea to me, I quickly concluded that it had to do with excluding a particular doctrine from the New Testament church. I guessed correctly that Billingsly intended to show why Jesus’ strict teaching on divorce and remarriage (Click on page four graphic to see real intent) was no longer was an issue. According to Billingsly, since the Old Testament is “done away”, and the Gospels are Old Testament, then Jesus’ teaching on divorce and remarriage is “done away” as well. By this, Billingsly contends that there is no “adulterous marriage” or “living in sin”. What is the truth?

So if the question is: “When did the New Testament go into force?”, at Jesus’ death is the answer. If the question is: “When did the teaching of New Testament begin?”, in the Gospels is the answer. The Old Testament was in force after the “Title Page” at the beginning of the Gospels until all was fulfilled at the cross. Jesus therefore lived under and obeyed the Old Testament Law that remained until His death. However, what He introduced in His teaching was the New and better Law/Covenant/Testament. Here is a graphic I created to illustrate the transition. 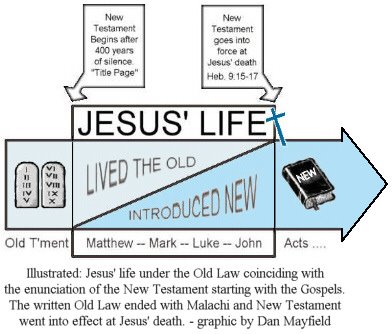 Billingsly seems prone to making sensational, but unsubstantiated, claims. He is wrong about the teaching of Jesus in the Gospels. There’s no doubt that Catholics have meddled with the truth, but the Title Page reflects the truth if we understand that the Church did not begin until Pentecost (Acts 2).

I would like to revisit the passage in Hebrews 9 because it clarifies the issue for us. “For where a covenant is, there must of necessity be the death of the one who made it” (Heb. 9:16). Billingsly would say this proves his very point. But he does not seem to understand the function and force of a written will. What Billingsly fails to grasp is that Jesus revealed truth for the future Church. The New Covenant was ratified at the death of Jesus; but Jesus spoke of the Church and its doctrines during his public ministry. During His public ministry, Jesus taught about the Kingdom, about the Church, about being lights in the world, and about living the Christian life on the inside. Jesus instituted the Lord’s Supper before the cross. “Do this in remembrance of Me,”, He said. The Sermon on The Mount is a sermon for Christians, and not just a clarifiation

Billingsly’s whole “CATHOLIC ‘TITLE PAGE'” and “MOST MISUNDERSTOOD PAGE” thing is a transparent and weak attempt to nullify what Jesus said about divorce and remarriage. The truth is, Jesus taught God’s will on marriage for all mankind. Unless your spouse was unfaithful, if you divorce and remarry, you are committing adultery and living in sin. Billingsly cannot get around this. His explanation fails to once and for all loose man from the consequences of sin.

Are we misled to believe that Christ’s teaching in the Gospels of Matthew, Mark, Luke, and John are done away with because they were uttered before the crucifixion? No, we are not misled. The Testament which Christ highlighted during His ministry, the New Testament, went into force at his death. During his earthly ministry, He was speaking of the future kingdom and urging everyone to repent. Thus Jesus’ teaching on marriage is still in force. As from the beginning, the institution of marriage must follow the design of God.