UNDERSTANDING THE BOOK OF REVELATION

Revelation and the wrath of the Lamb is shown to be poured out in the seals of chapter 6. The Christians in the first century would have heard the entire book being read in less than 1.5 hours. According to online audio versions, it’s at about 19 minutes into the listening that the Christians are seeing the answer of prayers against their foes. At 35 minutes he begins to tell that this Beast is forcing all men to worship him and he is putting Christians to death. See the images below which are snapshots from Youtube sermon audio. The first century Christians would have applied the message with fantastic images to things they knew. 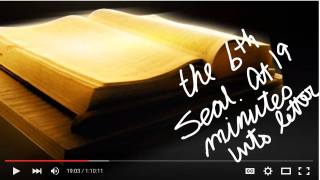 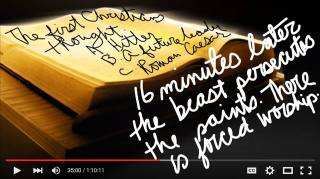 Now those Christians could think, A. Doesn’t sound like anything that’s happening now. or B. John is talking in code about the Roman emperor and God’s judgment against Him.

The book of Revelation needs to be read as through the eyes of the first century Christians. John was on the island of Patmos being exiled for the testimony of Christ. And he writes real letters from Christ Jesus to seven actual churches in Asia. He gives them real critique and guidance on how to overcome and gain eternal life. Then John shows God’s view of their present day circumstances and shows what He is doing in response to the evil of their day. To be rejected is the false teaching of Tim Lahaye, Jeff Jenkins, and others who teach that the churches are views of the church in 7 different ages of time, Laodicea being the present age church. No, the Revelation book is first written to the first century audience. Then, it has applications and encouragements to us in the present day. Now at the end of Revelation we see the end of time when the rule of Christ is completed (Rev 20:1ff, cf 1 Cor. 15:23-25) and the final judgment of all souls. The nations who were not written in the book of life go to eternal hell and those who believed Christ and followed Him spend eternity in paradise.